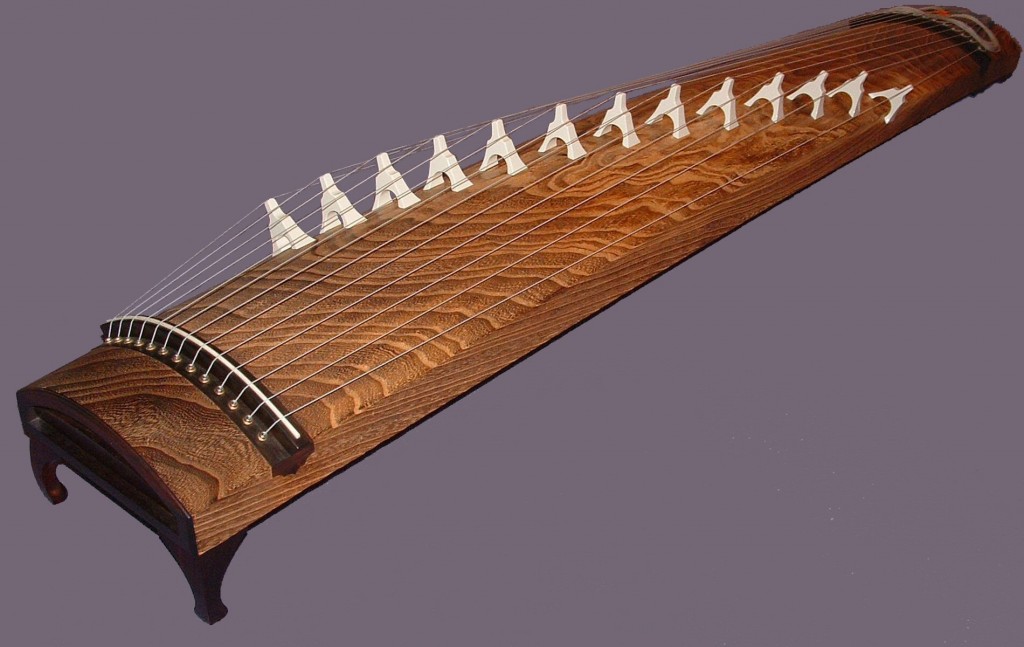 The koto is the national instrument of Japan, but its origins are Chinese.  It is a direct descendant of the guzheng, which is slightly shorter than the koto but has more strings (21 rather than 13).  The traditional tunings are a bit different as well.  The koto is often tuned in the minor pentatonic scale, and the guzheng in the major pentatonic.

Because of the movable bridges, it is easy to tune the instrument into whatever scale you want, although tuning on-the-fly is not so easy.  There are a few performers who do this, but I’m not one of them.

After people ask what the instrument is, they always ask about the wood it’s made of.  My koto is made from the traditional choice, Paulownia.

Paulownia is generic name of several different species of plants, native to eastern Asia, notably in Japan, Korea, China to North of Laos and Vietnam.  They are deciduous trees 40-50 feet tall with large, heart-shaped leaves and purple tubular flowers that bloom in early spring.

In Japan, Paulownia is called “kiri” and is used not only for making kotos.  It is often used in China and Korea for building other stringed instruments, and has several non-musical uses in Japanese culture, including furniture and the emblem of the office of Prime Minister, among others.

This tree is also known as “Princess Tree” in the United States, in honor of of Anna Paulowna, queen consort of The Netherlands (1795-1865).  It can be found mainly on the east coast.

I have been interested in koto music for many years, partly because of a general interest in Japanese culture, but mostly because I love the sound of the instrument. It evokes very powerful images–I can’t sit down to play it without having the music paint some kind of scene in my mind’s eye. The song above is a perfect example, and you can read more about the story here.

It took me years to get my hands on a koto. I tried many different places without success, then tried to connect with someone to teach me guzheng (the Chinese version), but still had no luck. The one day I decided to give it one more try and through a web search, discovered someone who could not only teach me to play the koto, but she had one I could rent, and so a koto entered my life. It’s been a remarkable journey and I look forward to each new step.