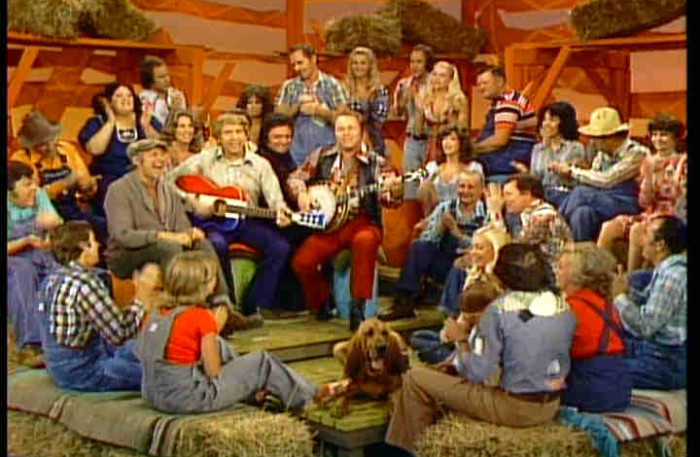 Did you ever have one of those moments when you realize that you’d accomplished a lifelong goal without realizing it? I had one last night.

I was getting ready to go out to a rehearsal and had an old rerun of Hee Haw on the TV. This is important because while I have never been a fan of country music, I grew up watching Hee Haw and I always liked the group sing-alongs that had more of a bluegrass feel to them. For years I dreamed about playing the banjo so I could do the grinnin’. I have a banjo, although I don’t really ever play it. That’s not the flashback part, anyway.

In preparing my previous entry about Miguel, I was going through sample tracks and decided on the Jugglefest song. What didn’t occur to me at the time was the way that song was originally presented. I sang it at the 20th Lopez Island Jugglefest and…you guessed it, had the audience singing along on the chorus. As I watched Buck & Roy last night, it struck me that one of the dreams I’d had as a kid had come true, and that there’s a lot more to come that that kid could not have imagined.  I’m looking forward to it!

Every time I pick up an instrument, the fact that I can make something come out of it that sounds like music just astounds me. It’s still this mystical art that I feel like I couldn’t possibly be able to do, and yet somehow I manage things that people say are pretty. While I feel reasonably confident about the stuff that I know how to do and I’m not afraid of trying new things, the wonderment of the accomplishment keeps a lot of magic in the musical process for me and I hope I never lose it.

Sometimes it’s hard to shake off the regret that I didn’t take up music earlier. I tried, but it didn’t really work well for a long time. But regrets don’t accomplish anything and besides, getting a late start allows me to be my own poster child with my adult students. I often tell them, “If I can do it, you can do it.” They won’t believe it unless I believe it, too. So to all those late beginners, take heart! It’s never too late.