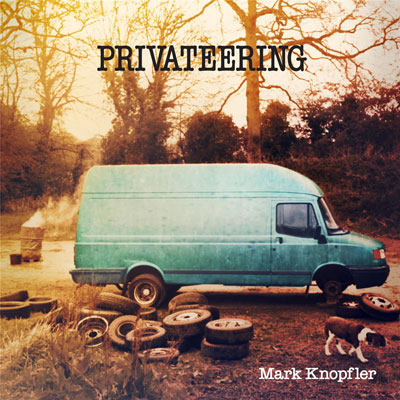 People who say that Mark Knopfler‘s post-Straits work has been bogged down in slow and overly-Celtic sounds clearly have not listened to Privateering (2012, Mercury). While it does contain a number of his Irish-flavored pieces, you’ll also find slide blues and tracks that seem like they came off of some Dire Straits basement tapes.

Mark Knopfler has been remarkably true to himself in his solo work, going in whatever direction he feels like rather than worrying about album sales. This album’s variety is exciting to listen to–it keeps you asking “what’s the next song going to sound like?” It offers a comprehensive view of Knopfler’s incredible songwriting range, not to mention his virtuosity on the guitar. There is some very subtle acoustic work here, alongside some gritty slide blues.

With 20 tracks, this album just keeps on delivering. Just when you think it’s done, another great song shows up to lead you in whatever direction Mark decides to take you. The ordering of the tracks keeps things fresh by providing a nice mix of styles and most tracks are in the 4- to 5-minute range, which gives them time to develop and present a whole message instead of trying to bookend a 3:05 hook.

This is the perfect album to introduce people to Mark Knopfler’s solo work. It’s also a great album for fans of Irish music, Dire Straits, and blues.