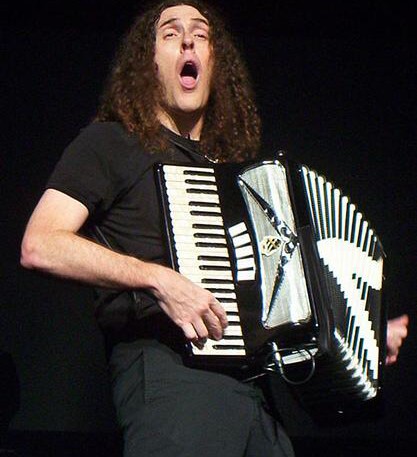 How Weird Al Restored My Faith In Humanity

Debbie & I attend a lot of concerts.  It’s pretty much our go-to choice for entertainment and between us we have pretty eclectic tastes, so there’s a lot to choose from and there are a lot of very talented people out there playing live.  That’s the good part.  The not so good part is how rude audiences have become, and it’s getting worse.

You spent what? Why?

Anyone who’s been to a concert in the last 20 years has undoubtedly seen this: The people who show up and talk all the way through the show as if they were sitting at home watching it on TV.  They’re also drinking as if they were at home instead of in public.  One might expect something like that at a free show, or in a bar where the music is supposed to be the background, but at a full-on concert?  And I’ve seen this at concerts where the tickets were as much as $250 each.  Why would anyone pay that kind of money if they’re not going to watch (or listen to) the show?  What kinds of jobs do these people have that they can throw away money like that, and where do I apply for one?

Outdoor venues are usually the worst for this, although we see plenty of it indoors too.  It’s getting so bad that we’re starting to think about skipping certain concerts because we know the audiences will be so disruptive, and there are some venues we will not go to unless the acts are on the ‘A List’ and there’s no place else to see them.

We go to a lot of concerts at the Oregon Zoo, which is a pretty good venue.  Thanks to long-term attendance and my disability, we are able to get seats that are great for being able to hear the show quite well.  The last two shows we saw there illustrate the point and the title of this post.

Huey Lewis is a consummate professional.  He and The News have been playing the same songs for over 30 years and every night they still sound fresh and full of energy.  You know they’ve got to be sick of the same songs with the same arrangements, but you’d never know it from their sound.

The audience was a very typical outdoor crowd.  Too many drunks, too much talking, too much yelling at inappropriate times, and WAY too much wandering around.  I had three different people step on my feet in at least a dozen trips that were made in & out of our row during the show.  That wasn’t during a break, that’s while the band was playing.

Anyone who knows Huey Lewis’s work knows about The Power of Love. It’s probably their best-known song.  And of course, they saved it until the encore set–that’s show biz.  But here’s the stupid part:  they played the song and about a third of the audience left as soon as it was over, even though the band played four more songs after it.  What kind of narrow-minded moron leaves after they hear one song?  I sat there wishing that they had played “The Power Of Love” as the first song of the night, so the people who weren’t there to actually see a whole concert would get up & leave more room for the rest of us.  It reminded me of a concert at the same venue where Burce Hornsby opened for Bela Fleck & The Flecktones.  After the Hornsby set, three-quarters of the audience left.

It was still a great show, but I’m not sure we’ll catch Huey Lewis at the zoo next time.  That’s solely because of the audience.

If you’ve never seen a Weird Al show, you owe it to yourself to go and catch his act.  The guy works his butt off with costume changes and choreography.  The technical part of the show is as tight as you’ll ever see anywhere, including synchronized video, remote camera feeds as Al is walking around the venue, and a band that can play any genre you care to name seamlessly every single time.

This audience was different in its composition, as you might expect.  First, everyone there was a nerd or was brought by a nerd.  Second, there were a lot of kids there.  Both kids who are fans and dragged their parents, and kids whose parents are fans and are passing on the magic that is Al.

They were a wonderful audience!  There was some drinking, but I didn’t hear anyone being drunk at any time.  They also didn’t sit there playing with their phones or talking during the show–everyone was there to see the concert, and it was heartwarming.  Not only did it make the show more enjoyable, but there was also  a feeling of community–of this group of people sharing the same experience at the same time rather than everyone being distracted by other things.  I wanted to rush the stage, grab the mic and tell the audience how awesome they were.  I didn’t do it, but I sure wanted to.

And what does this have to do with restoring my faith in humanity? Like I said, there were a lot of kids there.  Hopefully some, if not most of them will grow up with good concert habits and will teach those habits to their children.  I don’t know how long we’ll still have concert tours as opposed to mega shows that are beamed live around the world, but until then there may be a little hope left.

Everyone can do their part to help, too.  Donate time and/or money to your local arts program.  Help fund or organize school field trips to concerts and other live events.  Encourage everyone to put down their gadgets for five minutes and be aware of where they are, instead of where their browsers are.  I know it’s like holding back the ocean with a broom, but we’ve got to try.

Thanks, Al!  Thanks for creating things that reward intelligence.  We need more of that.