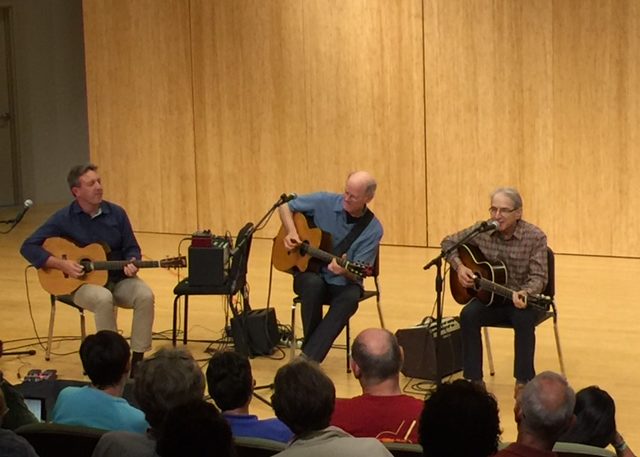 Sometimes, the devil really is in the details

I recently spent several days at the Accent on Music guitar seminar in Portland. It was challenging, and I got to meet a number of other players from around the world, as well as receive instruction from the amazing Clive Carroll, the wise & practical Happy Traum, and the creative Mark Hanson. Each of these guys had something useful to offer all of us and it was great not only to learn from them, but to have a little time to spend visiting and talking about music and hearing some wonderful, and wonderfully bizarre, stories from the road.

Anyone who reads my (all too infrequent, I know…) blog posts knows that I try to look at the positive side of things. This post will get there, but I think it’s important to point out something that I found deeply troubling although it wasn’t really anyone’s fault, except maybe mine.

Getting to the seminar was quite a journey for me. I first heard about it at a Clive Carroll concert in October of 2015, and immediately went home to visit the website. When online registration was opened, I jumped at the chance to sign up. Then in the spring my wife was downsized out of her job, and I had to cancel my reservation as the seminar’s price had become steep for our budget. This was a bitter disappointment, but you do what you have to do. A month or so later, Debbie had a new job and more hours and after some creative number-crunching I was able to ask if there were still spots left, and there were! Back to being excited!

But that excitement was based on ignorance, or at least naivete’ on my part. I was thrilled at the prospect of studying with others for whom the world is a highly auditory place, or so I thought. The reality was that I’ve seldom run across a group of more visually-oriented people. Every time someone would play something, everybody would lean forward to they could watch the player’s hands. One participant spent a lot of time taking stills and video anytime anyone was playing something he found interesting. Instead of fitting in, I felt even more alien than I usually do–and that was deeply disappointing. If you can see, I highly recommend this seminar–it’s well organized and they get some seriously talented folks to teach. But if you can’t, give it a pass.

I promised there would be positive things, and there are. A number of them, in fact…

Why pretend this wasn’t the best thing and try putting it farther down the list? Clive’s music has spoken to me since the first time I heard him play. His being at the seminar was the reason I signed up. He has wonderful stories from his career, and a really interesting perspective on music. While he performs on guitar, the bulk of his work is as a composer for film and TV. He writes the music he hears, and then figures out how to adapt it for whatever instruments he’s working with. We spent one class session listening to him describe the process of composing “Eliza’s Eyes,” which I found fascinating. That piece captivates me and I didn’t understand why until Clive explained it, and then it made perfect sense. I think that this instrument-neutral approach to music is what allows his music to resonate so much with me. It places the images, feelings, and story first, where they belong.

Besides being a nice guy with a quick wit and a delightfully dry sense of humor, Clive Carroll is also an incredibly patient teacher. I listened to him walk groups through the same piece of music again and again, and never once did he seem to get impatient or frustrated. His schedule doesn’t permit him to teach much now, although he hosts a seminar at his home in England each fall.

Clive has a passion for music that just seems to ooze out of him. During our free time, he would eagerly jam along when someone was working on something and he never seemed anything but completely genuine about it. This passion combined with his patience was quite inspiring to me and I hope it will make me a better teacher. I hope his ‘music rather than guitar’ approach to composition will help me create more interesting music, too.

Before this seminar, I didn’t know anything about Happy Traum. I’d heard of the Homespun collection of instructional materials, but never studied them. During our time together, I got the chance to learn from and talk with one of the nicest, most interesting musicians I’ve ever met.

I liked Happy’s classes the best because he didn’t have any handouts. He talked us through the sessions, and focused more on concepts that we could use in our own playing rather than learning specific songs. I felt like these sessions were made for me, and I tried to soak up every word. I’ve also been exploring some of the more advanced Homespun titles and am finding much that is useful both in expanding my abilities as a player and in ways to reach others as a teacher.

Each of the instructors hosted a group class, and Happy’s was a talk about his experiences during the folk revival in the 1960s. Not only that, but being right in the middle of the folk scene in New York City. It was fascinating, and I wish that time had allowed us to hear more. If you get a chance to catch this presentation, don’t miss it! I asked Happy if he’d written an autobiography, and when he said no I encouraged him to do so. I hope he does–so much has been written about that period by people who either weren’t there or who were more in the audience, and it’s a completely different view coming from someone who was there as a musician.

That is how I explained my situation to Clive when we were talking after one of his sessions. I think he was a bit concerned about what I would get out of the class since charts weren’t going to help me. I was touched by his concern and in a small way, I felt bad for him because I sensed that he doesn’t ever want to see a student not get something he’s trying to teach. Sure, it would have been nice to learn the various songs and then have a head start on figuring out how to use the various parts in my own work. But another thing I noticed is that many of the participants weren’t interested in writing their own music. They were happy as clams to continually learn other people’s songs and be able to imitate the sounds on their own guitars. I didn’t plan it, but that’s never been my focus with guitar anyway so for me, concepts are actually better than details in this instance.

When I met Clive Carroll after this October 2015 show I asked him, “When are you going to stop living in denial and get a harp guitar?”, because he works so much with bass notes. While we were talking about this point in July, he told me that he was going to pick up a harp guitar a friend got for him as soon as he got home. I hope he likes it and I am eager to hear recordings of what he comes up with. And while I won’t take credit for turning him on to the instrument, I hope I’ve helped in some small way.