All music is made up of notes, but what are they, really? There’s a lot more to a note than meets the ear. 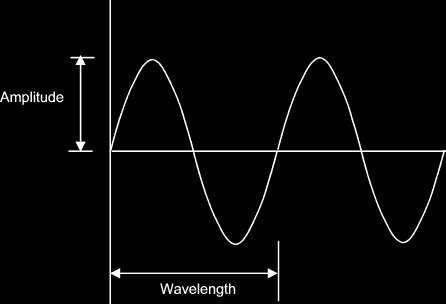 All waves are essentially the same. They all have amplitude and frequency.

The pitch of a note is based on its frequency. That means, how many times does the thing making the sound vibrate in a given span of time (normally one second)? In the case of a guitar, the thing that vibrates is the string. The higher the pitch, the more vibrations per second.

Each wavelength is equal to one cycle. Cycles per second are usually referred to as Hertz, which is abbreviated Hz. So a pitch of 440 Hz means that the string is vibrating 440 times each second. We call this note A. Why we do is very complicated and not really useful to know right now.

The volume of a note is how loud it is. In the diagram above, it is labeled as the amplitude. The louder the sound, the taller the waves will be. The amplitude of a wave doesn’t have to be related to its frequency at all, so you can have very loud low-pitched notes and very quiet high-pitched ones, or any combination you can dream up.

► BEWARE! Volume can be measured in many different ways. The word can refer to how much air is being moved, how strong an electrical signal is, or how much one sound stands out above other sounds. When you are talking to others, be sure you’re all on the same wavelength about what ‘volume’ means in your conversation.

The use of varying volume levels to accentuate parts of a piece of music is called dynamics and is a much-underused tool in the musician’s toolbox.

How long does the note sound? This is usually measured against the tempo of a song, which can be quantified into beats per minute (BPM). The duration of a note is written as an even numbered fraction such as half-note, quarter-note, whole note, eighth-note, etc. Precisely how long a half-note is doesn’t matter in terms of actual seconds, it only matters that a half-note is equal to two quarter-notes within the same piece of music. More on how this works when we talk about rhythm.

This is how the note’s sound begins. Is it sharp and abrupt, or smooth and gentle? For example, pulling up a string and letting it snap against the fretboard is a very sharp attack, while strumming very lightly is a much softer attack. There are physical limits to this on the guitar compared to something like the piano, but it’s still there.

This is a tricky one. The timbre of a note is the combination of elements that make is sound like it does. For instance, the timbre of an A note at 440 Hz on the guitar is very different from the timbre of “440 A” played on a trumpet, even though the notes have the same pitch. We usually use descriptive words for this quality such as bright, thin, brassy, soft, boomy, twinkly, etc. There are no hard & fast rules about which word goes where, although you’ll probably run into some commonly-used terms along the way.

You thought timbre was a subtle thing, right? It doesn’t hold a candle to the concept of color. The color of a note or chord usually refers to the very subtle shading of the sound within its timbre and is often referred to by the same words we use to describe light colors: warm or cool or vibrant or muted, etc. ad infinitum. An example of this for guitar: If you’re playing an acoustic guitar and you think the sound has too many high-frequency elements in it, you might adjust the sound to bring out more mid-frequency elements and soften the higher ones. This would make the color of the sound warmer. Color is also often referred to as tone with all the same meanings as just described.

There are a lot of things that can color your tone, both intentional and unintentional. Some examples are: the material or thickness of your strings; the components in your amplifier; the room you’re playing in…the list goes on and on.

Go Your Own Way

Remember this:  when you play a piece of music, it’s your music no matter who wrote it. If you hear tone that you like, incorporate it into your own sound but don’t copy it exactly. Your tone is as much a part of your style as the way you approach each song, or even each note. Be yourself! Your music will sound better and you’ll feel better about playing it.

If you found this item useful, please consider making a donation to support further development.