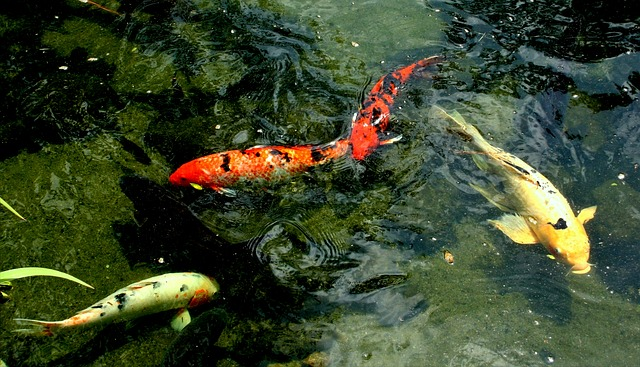 As long as I have been playing guitar, I never get such strong imagery as I do when I sit at the koto.

I was playing at the Tigard Bull Mountain Farmers Market today, and I took the koto to add some variety.  The response was nice, although many people didn’t seem to know what to make of the instrument.

Handy Tip:  If you want to be a hit in the mainstream, stick to instruments that most people can identify.

I find that as background music, the koto is easy to play because with just a little care, you can get pleasing music out of it pretty much all the time.  In doing that, I discovered two new pieces hiding in the koto and learned something about its power to evoke images.

Koi-To will be a tranquil piece inspired by the image of Koi swimming in a garden pond.  TaiKoto will be a punchy, driving piece inspired by Taiko drumming.  Note that these titles may change over time as better ideas come along.  Listen for rough drafts of these pieces coming soon.

Both pieces grew out of mental pictures that I had and then just let the koto do the painting.  But I also learned that noodling around a little and listening to those noodles can evoke images too, which in turn help direct & refine the music.

I was just listenting to an interview with Michael Manring, and one of the topics they discussed was about where inspiration comes from. Each artist has a different answer, but I think it’s safe to say that in general, inspiration comes from connections that form in our brains.  All art comes from putting known things together in new ways and then turning those creations this way and that to find the right interpretations, presentations, and environments that seem right to the artist.  And in some cases, others will also feel connections and enjoy the art.  They will probably not feel the same connections, because each person draws on their own experiences to interpret art.  That’s where the magic happens, and that’s why there keeps being room for all the creativity we humans can bring together.

Inspiration is external, but creativity comes from within.  What inspires you?